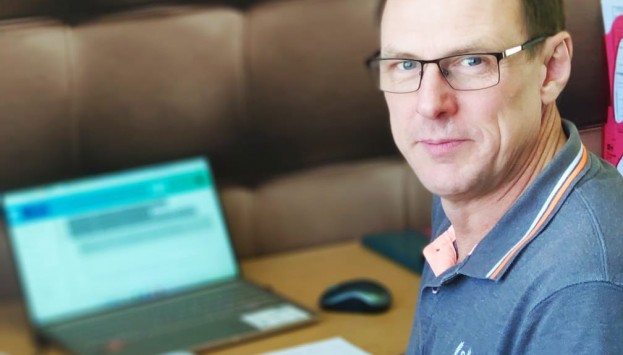 OPAIC student Alexey Zernov intended to take a short holiday in Russia between completing his English language programme and starting his Master of Applied Management.

“However, not everything happens as we planned sometimes,” he says.

“Coronavirus sharply spread around the world, and more and more countries closed their borders every day.”

His trip from Auckland to his home city of Tomsk went smoothly, despite having to take a roundabout route through Bangkok, Vienna, and Moscow. He arrived home to an outside temperature of -25degC.

Alexey says he quickly settled into his usual routines, spending all his free time with his family and even forgetting about COVID-19 for a while.

He then heard about growing travel restrictions around Europe. He was due to travel back to New Zealand via Munich but had to change his itinerary to exclude any European countries.

Alexey managed to line up a flight that would go from Moscow to Auckland via Singapore.

“At this time, I thought that all should be ok, and began preparations for my flight.”

However, the New Zealand Government then announced everyone arriving would need to self-isolate for 14 days and his landlord asked him to find somewhere else to stay for the self-isolation period.

Unperturbed, Alexey arranged accommodation for the two-week period, but the news then came that New Zealand’s borders had been closed.

“That was the last straw,” says Alexey.

Despite all the setbacks, Alexey’s thankful OPAIC has allow him to begin his mater’s degree from Russia. He’s now taking part in online classes.

“It is a very comprehensive and useful experience,” he says.

The online delivery mode comes with challenges and opportunities.

Due to time differences, he starts his classes at 3.30am, which is “a little bit uncomfortable”. Group work can also be a little harder online.

On the other hand, he can be at home with his family, and save money on rent.

Alexey says the COVID-19 situation in Russia is stable. He is in lockdown until the end of April, and almost all international flights have been cancelled.

He’s looking forward to seeing all his friends back in Auckland when restrictions are lifted.